Out of print for decades, the publication of the 2019 edition of Teems of Times and Happy Returns marks the 30th anniversary of Dominic Behan’s death. Featuring exclusive illustrations by Redthreads artist Fleshpile

It is difficult for us now to imagine how transformative Crumlin, Kimmage and schemes like them were in the hungry 1930s, and not just for those moving into them from the inner city tenements.

Dominic Behan’s classic work captures both Dublins of the era – the city between the canals and what the Behans would jokingly christen ‘Siberia’ – with wit and insight.

It remains one of the great Dublin memoirs.

Dominic was best known as the songwriter behind “The Patriot Game” and “Come Out Ye Black and Tans,” but the legacy which he left to working class literature, song and theatre goes far beyond those tunes. 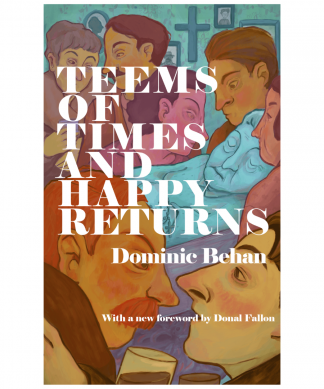 You're viewing: Dominic Behan Teems of Times and Happy Returns €15.00
Add to basket