For Whom the Hangman’s Noose Was Spun; Wolfe Tone and the United Irishmen – Seán Cronin

For many Irish people, Theobald Wolfe Tone epitomises the spirit of the French Revolution. It was under the impact of the Revolution that Tone developed a fascination with politics which he never lost. Although the candour, courage, and charm of Tone’s personality – to say nothing of his literary style – as revealed in his diaries, journals, and essays, have won him many admirers, from the Duke of Wellington down, his ‘French ideas’ and revolutionary politics have provoked a host of enemies. The late Archbishop McQuaid of Dublin referred to ‘the immense harm Wolfe Tone had done to the Irish character.’

Tone’s most important legacy was the ideal of an Irish union in ‘the common name of Irishman’. In a lecture on the bi-centenary of Tone’s birth in 1963, Hubert Butler observed that Ireland is today, ‘as in Tone’s time, a patchwork of conflicting loyalties. Now, as then, they seem to be mostly irreconcilable. But they would cease to be mutually destructive and become complementary if there was one over-ruling loyalty – the common name of Irishman.’

In this book, Seán Cronin tells Tone’s story drawing on his own words for a sense of what it was like when

Bliss it was in that dawn to be alive,
But to be young was very heaven. 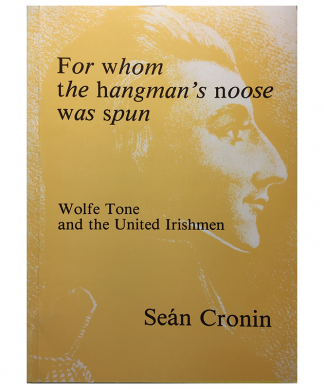 You're viewing: For Whom the Hangman’s Noose Was Spun; Wolfe Tone and the United Irishmen – Seán Cronin €5.00
Add to basket