There is an alternative history of Ireland. It is written by a man who wished for an Ireland of a new sort. James Connolly is often depicted amid the dust and broken stone of rebellion. But Labour in Irish History shows a man who wants to build. He did nothing “for Ireland” and everything for the working class. Busts and badges and pictures are all very well but this book shows his mind.

Labour in Irish History shows a very literate mind; a sense of history needing new strategies; a ruthless eye for the enemies of the many; a mind which felt – and understood – the blows and punishments dealt out to the wretched of the earth wherever on the earth, for he was on one of their number.

He turns a Marxist eye on Irish history and fiercely debunks what is still accepted as truth. Thus, the “Liberator” Daniel O’Connell is obliterated. O’Connell’s rantings against the early trade union movement, especially in Dublin are set out by Connolly and show him as a swanky aristocrat happiest in London, where power lived.

Connolly shows that unjust and distorted economies throw up unjust and distorted societies. Just like Ireland now, a century after his execution. He read the faces of the poor and the books and ledgers and facts that explained those faces. Seldom has a heart burned brighter against capitalism. Seldom has a braver man or woman worked for the workers throughout a braver life. 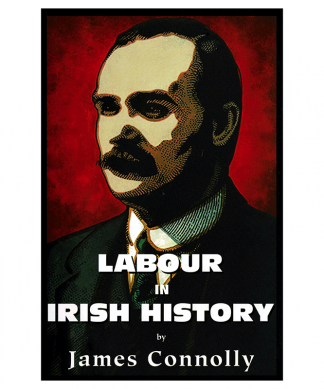