The Starry Plough was designed by George William Russell for the Irish Citizen Army. It was unveiled in 1914 and was flown in 1916 during the Easter Rising. The name and design of the starry plough was inspired by James Connolly, who said free Ireland would control its own destiny from the plough to the stars.

“The cause of labour is the cause of Ireland, the cause of Ireland is the cause of labour. They cannot be dissevered. Ireland seeks freedom. Labour seeks that an Ireland free should be the sole mistress of her own destiny, supreme owner of all material things within and upon her soil. Labour seeks to make the free Irish nation the guardian of the interests of the people of Ireland, and to secure that end would vest in that free Irish nation all property rights as against the claims of the individual, with the end in view that the individual may be enriched by the nation, and not by the spoiling of his fellows.”
-James Connolly

Available in black and cardinal red. 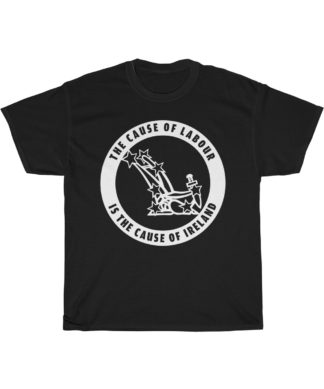